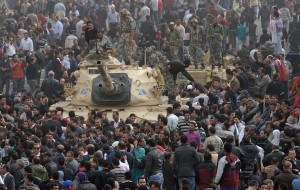 With Mideast Unrest, Now Is Time For American Energy Independence As unrest in the Middle East spreads from Tunisia to Egypt and so on, America’s foreign oil supply will become threatened.

The price of oil has risen dramatically in the past few weeks. Already in Israel, that country is concerned about their natural gas pipeline agreement with Egypt becoming voided–hindering their supply.

In the US, our government has got to realize that Saudi Arabia, Libya and other OPEC nation’s are probably going to be next, as riots and political discourse worsen.

Nothing will protect our freedom more than complete energy independence. As I have called for previously, we cannot sit back and wit, and continue with a business as usual mantra– because the world is changing.

America should not be held hostage in supporting dictators just because they will sell us fuel. We need to launch an America energy independence movement that encompasses all forms of energy–solar, wind, natural gas— and even coal and oil. If that means drilling in protected regions, then we must, as long as we have safeguards in place. Environmentalists and Big Business advocates need to come together for the good of the nation to develop a strategy of becoming 100% energy independent by 2020.

Let’s put partisan differences aside and work together on this single issue. It will bring jobs to this country, and with mandatory environmental safeguards in place, it can be a model for other countries to follow.

Wouldn’t it be nice to be able to sit back in ten years and watch the new rounds of Middle East fighting unfold on our television and computer screens–without having to worry about how our oil prices will be affected and which dictators we should support.

America, wake up! Total Energy Independence by 2020. Who is with me?