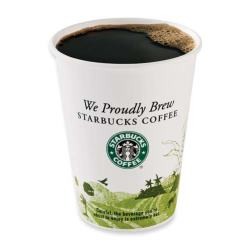 An article in Resource Recycling notes that Starbucks has released a report outlining its plans to make all of its cups reusable or recyclable by 2015, as contained in their report, Starbucks Global Responsibility Report: Goals & Progress 2010.

Last year, Starbucks tested the recyclability of its paper cups containing old corrugated cardboard with a pilot project in seven stores in Manhattan, which was later expanded to 86 of its New York locations. In 2011, it launched additional pilot projects to get a handle on the most effective ways to collect the cups.

The article reports that recycling the ubiquitous cups has been challenging for Starbucks, with coordination of its 17,000+ shops nationwide, as well as finding limited demand for the recycled cups, which account for about 95 percent of the company’s in-store beverage packaging.

“The real obstacle is the lack of robust commercial and residential recycling systems in many of the communities where we do business,” reads the report. Starbucks also plans to introduce front-of-store recycling in all of its company-owned locations by 2015, and so far has it in 5 percent of its stores.

“While we have a long way to go to reach our 2015 goal, we hope to see significant improvement in this area in 2011,” reads the report.

Perhaps if they became the primary purchaser of recycled paper cups, it would create momentum for this movement. Starbucks can take the lead by using only recycled coffee cups. I think a market would be created immediately.

In the meantime, kudos to Starbucks for taking the green challenge seriously and promoting good corporate social responsibility.