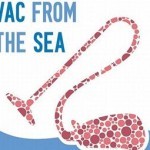 Electrolux is raising awareness of plastic waste in the oceans by putting plastic collected from waters around the world into some of their vacuum cleaners.

In their new initiative, known as Vac From The Sea, Electrolux will roll out a small line of vacuum cleaners made from plastic gathered from oceans and seas, in order to bring attention to how much plastic is ending up in floating around in marine environments and harming animals.

One researcher, Charles Moore,from the non-profit Algalita Marina Research Foundation in Long Beach, California, says a patch of plastic debris weighs about 3 million tons and covers an area twice the size of Texas is floating in the oceans. About 20 percent of the plastic in the oceans comes from ships or offshore platforms; the rest is blown, washed off the land or intentionally dumped, according to a preliminary report issued April 2004 by the U.S. Commission on Ocean Policy.

Plastic waste in the ocean has more than tripled in the past 50 years, This is dangerous because not only does plastic that is in oceans kill birds and other creatures, but plastic breaks down into smaller and smaller pieces over time, which is consumed by fish and ends up in the entire food chain.

Perhaps more recognition of this plastic waste growth will serve as a wake up call to the UN and sovereign nations to begin to clean up the seas — or will it take a few more deep oil rig disasters to awaken the sleeping giants?