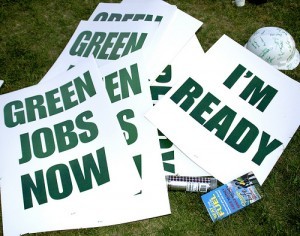 Austin, Texas: A new study by the Brookings Institute gives a detailed study of clean jobs in America, and it shines some new light on its impact to the economy.

The report shows that the clean economy establishments added half a million jobs between 2003 and 2010, expanding at an annual rate of 3.4 percent. As a whole this is very impressive, but is still trails the overall growth rate of the economy, which grew at 4.2 percent for the same time period.

Another benefit of clean jobs is that they offer more opportunities and better pay for low- and middle-skilled workers than the national economy as a whole. Median wages in the clean economy—meaning those in the middle of the distribution—are 13 percent higher than median U.S. wages.

As the election campaign season begins to heat up, do not let politicians dismiss green jobs as a part of a ‘liberal” agenda or scheme. It should transcend party lines.

The numbers do not lie.

Green jobs are good for the entire US economy and any politician that calls it out for anything other than job creating just does not have their facts straight.

What city or state would not want clean, green jobs in their backyard?

Be active in the upcoming elections and ask questions of your politicians.

What are they going to do to bring in more green jobs?

If they cannot answer this question, perhaps they are not the best candidate for the campaign—regardless of party affiliation.

I’d vote for that!