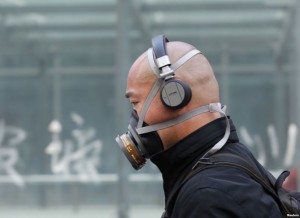 A Recent Study Proves Air Pollution Causes Cancer. So What Are We Going To Do About It? Austin, Texas: What many of us have long suspected to be true has been proven to be so: Air pollution causes cancer.

Now that we know, what are we going to do about it?

The International Agency for Research on Cancer declared this week that air pollution is a carcinogen, just as asbestos, tobacco and UV rays.

In a statement released after reviewing the literature, the Lyon-based agency said both air pollution and “particulate matter” – a major component of it – would now be classified among its Group 1 human carcinogens.

That ranks them alongside more than 100 other known cancer-causing substances in IARC’s Group 1, including asbestos, plutonium, silica dust, ultraviolet radiation and tobacco smoke.

Kurt Straif, head of the IARC department that evaluates carcinogens says, “The air that most people breathe has become polluted with a complicated mixture of cancer-causing substances”.

He went on to say that his agency now considers pollution to be “the most important environmental carcinogen”.

In the last Presidential election, there was much debate over regulations and Big Business vs. Government.

Well, how much in tax breaks and campaign lobbying is it worth to have a loved one die of lung cancer — for the sake of “big business”?

When are Americans going to speak out about pollution control–instead of fighting against it in courts (as is going on right now in the Supreme Court on EPA gas emissions)?

When is the news going to report consistently on the dangers of breathing in pollution – or are they going to be bullied by paid advertisers?

When are we going to care enough about the lives of our children and grandchildren to start protesting against companies that are polluting?

It sure has been a long time since I can last remember a national debate against pollution.

Is the economy and ObamaCare all that matters to people – or is the breathing of cancer-causing air pollution going to eventually wake us up in time to face reality?

Let’s get involved and support the EPA and their legislation to limit pollution in cars and from utilities.

Let’s speak out on air pollution.

Who is going to speak up — for the lives and health of you and your loved ones — if not yourself?