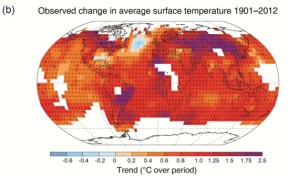 How Much Time & Effort Should Be Spent Trying to Sway Climate Change Deniers? The report found that “each of the past three decades has been warmer than all preceding decades since 1850, and the period from 1983-2012 was “likely” the warmest 30-year period of the past 1,400 years in the Northern Hemisphere.”

The study projects that “global surface temperatures are likely to exceed 2.7Ã‚Â°F above preindustrial levels by the end of the century and will likely range from 0.54Ã‚Â°F to 8.64Ã‚Â°F above 1986-2005 levels, depending on greenhouse gas emissions.”

Now, we can all make dire predictions about how climate change will affect the planet over the next 50-100 years–it can only be speculation.

Prognosticators on both sides of the debate can use this data to prove or disprove the warming trend –and that past predictions have fallen short of actuality.

My thoughts are that the environmental debate should be focused on swaying those that are confused and/or conflicted on the topic, as well as the most ardent proponents of the green discussion.

Arguing about the need for emission controls and a reduction in fossil fuels to a climate change denier is akin to arguing religion to an ultra-orthodox religious zealot (of any religion). It just is not going to sway the,

Fortunately, with enough education and proper awareness, we can try to win the undecided vote–just as if this was an election campaign.

Those on our side need to be motivated and recognized. Those in the middle can be swayed with proper focus. Those on the far extremes–forget about them!

But let’s promise to engage the “undecideds” with facts – and not with grandiose rhetoric, name calling, and predictions of gloom and doom.

But facts can be backed up …and if we can show honestly and sincerely that humans can affect climate change and that it is not too late, we can win more to our green cause.

But let’s not waste another second arguing with a zealot.

Our time is more valuable than that.