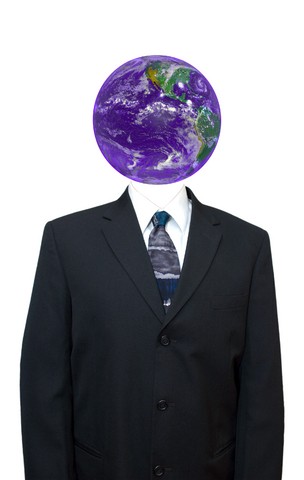 Green is the New Pink? Is Green Not Macho Enough? According to the 2011 study by OgilvyEarth, “Mainstream Green: Moving sustainability from niche to normal,” 82% of respondents said going green is “more feminine than masculine.”

Only 18% think going green is Masculine. Why is this so?

Is it that men do not care about the future of their kids and grandchildren — or are they evil? I don’t think so, especially since I am a married male with children –and I am green.

I think it is because “going green” is more prevalent at the retail level, where women are the primary target market. For instance, most reusable shopping totes and water bottles have floral or less manly designs. I know that for a fact, as I have worked on hundreds of custom reusable water bottles and tote bags last year for clients, and the majority had a feminine design features, including flowing script font, flowers and birds, etc. The same can be said about most consumer products at the grocery store—designed to appeal to females.

Now is not the time to write off the “green male”. Perhaps now is the time to get male athletic role models to become spokesmen for products.

Peyton Manning or Chuck Lidell seem like good fits. How about Dwayne “The Rock” Johnson or other more macho celebrities becoming green spokesmen. He can kick the butts of George Clooney and Sean Penn, so by default, he is most macho. How about the motorcycle chop shop or woodworking reality show men becoming spokespeople for energy efficiency.

Imagine the impact on green if the NFL had a Green Awareness Day, like they have Pink Breast Cancer Awareness Day. I know the NBA had Green Week, but it was during the end of the season when most people were looking toward the playoffs–and I did not hear much about it. I was also excited to see that Major League Baseball is celebrating Earth Day.

How about memorable environmental scenes in the movies and on TV? Back in the 1930s and 1940s, I understand that the movie production companies were paid by the cigarette companies to show their stars smoking cigarettes–especially after romantic scenes. Well, what could be sexier than a man recycling a beer can after a love scene? Huh–hello Hollywood!

There is nothing feminine about the Three R’s.

1 ) Reduce: Sure–Surely every male can find one way to reduce their energy consumption.

Shutting off lights is always a nice start.

Making fewer runs to the store while running errands.

Maybe buying larger portion sizes of mac and cheese, instead of smaller packages that have more packaging that ends up in the trash.

2 ) Reuse: OK., most of us males have no problem wearing the same clothes that we find on the floor in the closet or on the sofa, but that may not be the best example of reusability.

However, I do think reusable water bottles, especially stainless steel bottles, can be the ultimate macho, green symbol. I take mine with me to restaurants and feel very secure in my masculinity while using them.

Heck, even NASCAR has jumped onto the recycling movement.

My Solution — an Eco Scorecard. This should work for us…as men are notorious in keeping score and coming up with statistics–however meaningless they are.

These stats can be bragged to among friends. Most men love talking mundane and meaningless stats–who doesn’t?

Who knows, maybe there can eventually be a Fantasy League for the Sport of Greening.

It’s got a good ring to it.

Maybe it will eventually it will get its own 24-Hour Network. Even Golf and Tennis have their own networks, so why not?

Let’s put the macho into green. After all, there is nothing feminine about pollution and global warming.