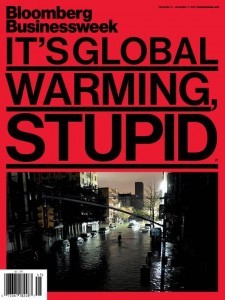 Climate Change is Real--Whether You Believe In It or Not Even the conservative business magazine, Bloomberg Businessweek, understands the damage and reality of climate change.

Austin, TX: After watching the destruction and ferocity of the damage caused by Hurricane Sandy earlier this week, I think that one positive thing may emerge: a movement toward a greater belief of climate change.

People can argue foolishly whether or not climate change is man-made or not — but that doesn’t change the situation.

The rate of intense storms happening around the globe over the past ten years has grown exponentially.

In America alone, from Katrina to Irene to Sandy– storms have been increasingly destructive and the loss of lives, homes, personal effects and more are in the hundreds of billions of dollars.

Th next time a politician complains that environmental regulations may cost a few jobs– remind them of the billions of dollars in property claims that the US taxpayer has to bail people out with.

Remind them of the hundreds of lives that have been lost.

Remind them of the cost of clean-up for people whose lives will never be the same.

Remind them of the cost for FEMA, Red Cross donations and the tens of millions of dollars that have to be raised with each storm from private citizens.

Then — do the analysis and decide if the slim possibility of a few job losses for environmental regulations vs. the cost of another massive cleanup.

This climate change debate is no different than the cigarette debate from year’s past–where people argue about their personal freedom to smoke — but don’t take into account the cost of medical costs for treating their emphysema and lung cancers–which drive up the cost of insurance for everybody.

Not addressing the costs and ramifications of climate change is fiscally irresponsible.

Anybody that argues that climate change should be viewed with the same look of consternation as people who are still racists or evolution-deniers.

Education is the answer to climate change.

Climate change should not be a political issue.

It should be a patriotic issue

It should be a national health issue.

It should be a security issue.

Climate change – and ways to combat and reverse it- should be one of the nation’s top priorities over the next decade.

Here’s to a greener tomorrow, today.
——-