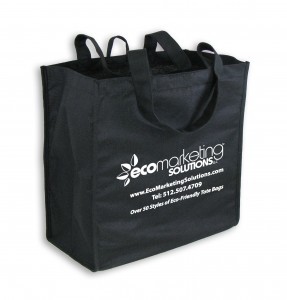 Imprinted Tote Bags Can Get Your Message Seen Over 12,000 Times Per Year

Business people who spend money on advertising and marketing will be surprised to learn that advertising one’s name on a reusable tote bag is over 15 times less expensive per impression than any other form of advertising.

People who receive an imprinted reusable bag use them an average of 9 times per month, according to the June/July 2008 survey of 618 businesspeople on behalf of the Advertising Specialty Institute.Since the bags have a large imprint area and are displayed in a visible location, the advertising message will be seen an average of 1,038 impressions per month; nearly 12,500 people will see that message each year Ã¢â‚¬“per bag.Give out 500 imprinted bags, and in one year, over 6.2 million people will have seen your imprint.

Because imprinted bags, such as totes, are a useful item, they are kept for an average of 9 months, according to the survey. The study also points out that 53% of those who received an imprinted tote bag indicated that their impression of the advertiser had become either significantly or somewhat more favorable after receiving the item.

Reusable bags are good for the environment—as they prevent plastic bags to be used.Those made from recycled materials or from natural cloth or jute, are even more eco-friendly.Plus, they are traveling billboards for your message.Imagine the impact of 500 or more people carrying your mini-billboard around Ã¢â‚¬“wherever they go.

Reusable imprinted bags are both good for the environment and good for your budget—it is a winning combination.

1) The ASI survey was a series of interviews conducted in June/July 2008 in New York, Chicago, Los Angeles and Philadelphia regarding promotional products they had received. The purpose of the interviews was to understand how advertising specialties influence end-users’ purchasing decisions; determine the number of impressions of popular advertising specialties; and analyze the Cost Per Impression (CPI) of advertising specialties compared with other popular advertising media.Further, during October 2008, an online panel survey was conducted among recipients of advertising specialties to augment the non-wearables sample from the in-person interviews. Results have been combined in the report where appropriate. There were 213 completed Web based interviews, for a total of 618 completed surveys for this study.Respondents were asked if they had received any promotional products in the last 12 months. Most respondents were business/professional people (84%) and all were age 21 or older.

2) The CPI of billboards and cable TV rates came from Los AngelesMobileBillboards.com and the CPI for the other forms of advertising came from The Nielsen Company for 2008.

3) Research and graph provided by the Advertising Specialty Institute, 2008, All Right Reserved.