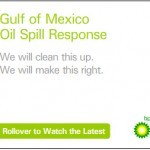 BP: Planning a Major Scaleback in its Gulf Clean Up Efforts-Why?

Although BP advertising, like the one online at WSJ.com tries to portray the company as fighting 24 hours a day to clean up their oil spill mess, WSJ.com points out today that BP’s incoming chief executive said it is time to scale back the effort to clean up the spill — but stressed that the commitment to rectify problems hasn’t weakened.

Bob Dudley, who heads BP’s spill-recovery effort and will take over as CEO in October, said it is “not too soon for a scaleback” in the cleanup, and “you probably don’t need to see people in hazmat suits on the beach” in areas where there is no oil. He added, however, that there is “no pullback” in BP’s commitment to clean up the spill.

I find it hard to believe that there will be “no pullback” after this statement.

Just because they used chemical dispersants that sunk the oil from the surface does not mean that the oil has miraculously disappeared.

I hope Congress and the public does not let BP off the hook this easily. They have helped to destroy marine life in the gulf region and should not leave until all oil has been cleaned and the area returned to its previous condition.

Write to your Congressmen.
Boycott the company.
Get involved.